When you think of a glamorous mode of transport, perhaps you’d think of flying first class or cruising in a luxury ship. Only a few thinks of trains. But back then, travelling on trains used to be so glamorous. It was 1804 when trains first hit the tracks, but they were mostly a locomotive engine used by the iron industries. Trains started carrying passengers in 1825. It used to be slow, so passengers can enjoy some fine time at the train.

Back then, people packed their luggage in posh trunks and drank champagne in luxurious dining cars. Trains were a glamorous form of travel before because only the rich can afford it. It was considered a status symbol to be able to travel by train, as some can only pay for horse carts.

This is what train travel was like during its heyday: Tran travelers around the early 1900s do get dressed up for travel. You can see women wearing dresses, with their mink fur coats, gloves, cloche hats and pearl necklaces. Nowadays, people dress pretty casually for the train.

There has always been crowds in train stations ever since. But back then, people seemed more civilized and can patiently wait in line for their turn. Modern travelers today are mostly impatient and on the rush. This is also why you mostly see people using their gadgets on the train station, as people today get more bored easily. Most of train travelers today travel bring only compact suitcase with wheels and a smaller bag such as a tote bag or a backpack. Before, people pack up their things in fancy luggage and stylish trunks mostly made of genuine leather. Trunks are made of heavy metal, and people use a cart to push their heavy luggage. Most people use the help of porters to push their belongings. Since earlier travelers used to bring heavy luggage (and a lot of things for that matter – some even bring their sleeping mattress with them!), there are a lot of porters in the railway station. As soon as the train stops, porters will greet you and help you take down the luggage or get it on board. Since people carry more than one luggage, porters are tasked to lug around that heavy luggage. Their jobs get more overwhelming, given the bulk of all the baggage the passengers of the train have.

In modern stations, there are only a few porters left, because we have wheeled bags today. And also, travelers generally have to carry their own luggage. 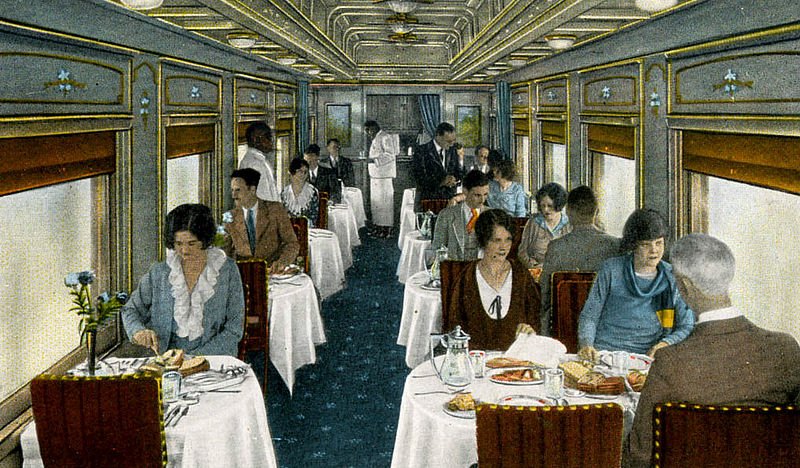 Today, only long-distance trains serve food on board. In the past, train journey involved meals and all sorts of drinks even in short distances, because the coal-powered engines weren’t fast and efficient after all. Steam trains feature a luxurious interior that looks like a restaurant. Passengers can enjoy a hot and hearty meal on board, complete with servers.

Dining cars nowadays are more modest, and the provisions are unpretentious. While train meals aren’t criticized a lot like their airplane counterparts, they’re usually not fancy. Plus, most people today will just grab something from a restaurant or a fast food joint to eat in the train.

Before, if you felt like having a drink, you can visit the tavern car. Tavern cars have bar-like provisions, which the British Rail introduced during the 1940s. Riding the train didn’t mean you have to skip your afternoon tea time. In trains back in the day, tea is served on teapots and teacups, so you can still hold your tea party with your gals while on commute.

Nowadays, drinks are simply served on the regular car. People just purchase their coffee or tea from a shop at the train station or at the café car.

Sleeper cars back then look like hotel rooms – comfy and private. You can also call for train attendants to bring you food or tea while you’re on the “bed.” Today, sleeper cars are still comfy, but they are not as luxurious. And if you’re not in the sleeper car, you can just wear an eye mask and sleep on your seat.

Speaking of seats, first-class cars back in the day were truly classy. Their seats are like couches, and even the floor of the train have opulent carpeting. Today, first-class cars are spacious, but even the high speed trains that offer “luxury train travel” have seats that are standard-looking. Some railways don’t even offer first-class sections, so business class is your next best thing. Amtrak, for example, only offers their first class on Acela trains – the rest have business class as their most upscale offering.

Trains in the 1800s and early 1900s used to have luxurious compartments. Since slavery and racial discrimination was prevailing in society, there were also classes on the compartments, with first class being the most comfortable, and the third was the least. Today, as we push for equality, train coaches are uniform and looks all the same. Only the luxury trains have different coach structures. The golden age of train travel saw a lot of bookworms. Passengers bring books or newspapers with them, as reading was the only mode of entertainment. As a result, train stations used to have book and newspaper stalls. You can grab a book from any station on the way, while some bring their own books, adding to their bulk of luggage.

Trains today are filled with gadget-addicted population. Many use their smartphones or laptops to entertain themselves, and most trains now boast their Wi-Fi availability. It’s rare to find someone curled up in a book or a newspaper – most probably, some that do are reading on their phone to lessen their baggage.